Voices for Peace in 37 Languages T-shirt 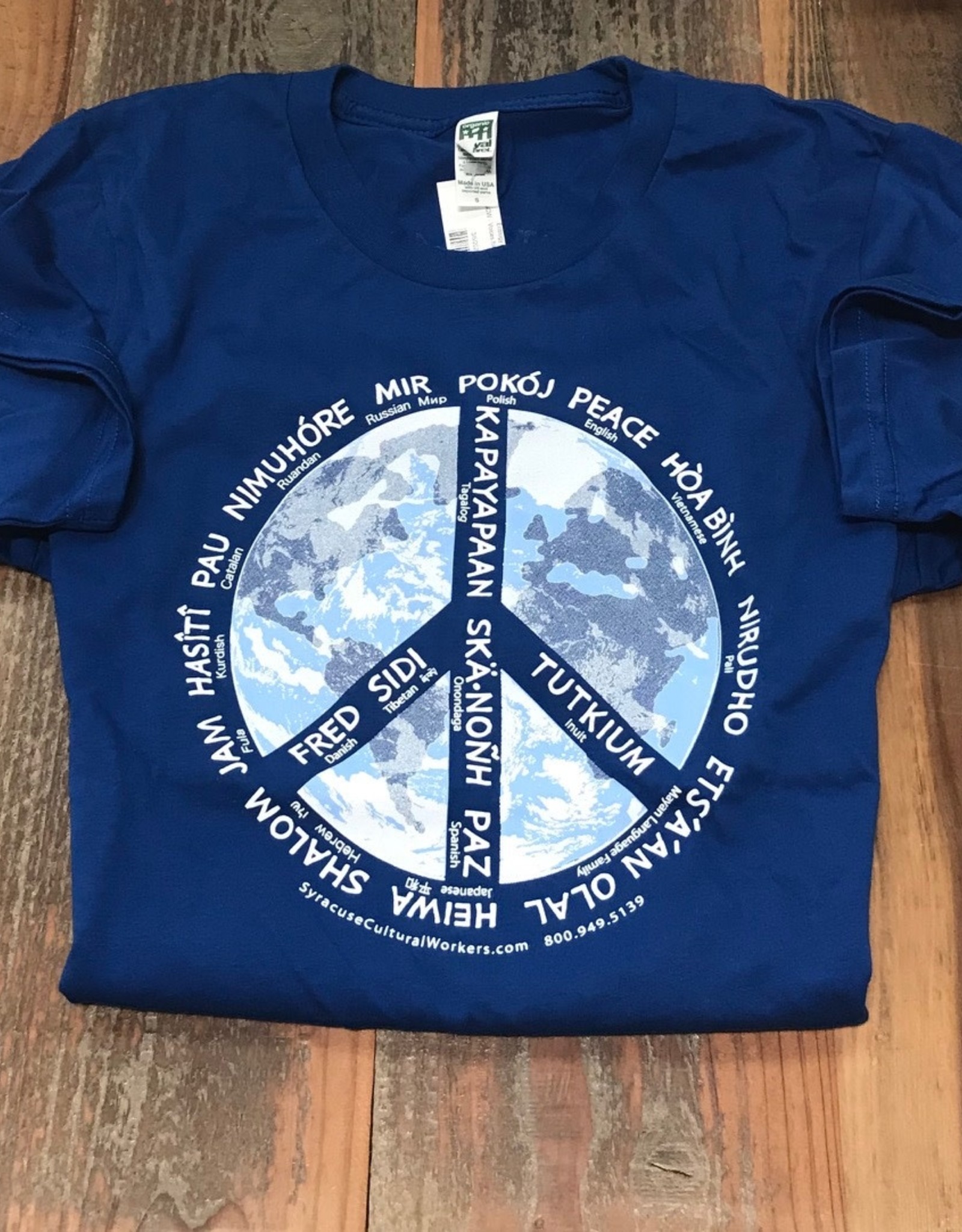 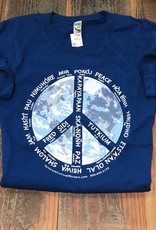 An international and universal symbol of our shared longing for peace. The word PEACE is shown in 37 languages, selected with these criteria: recent areas of conflict (Arabic for Palestine & Iraq, Hebrew for Israel, Pashto for Afghanistan); permanent members of the UN Security Council (China, England, France, Russia, US); representation from each continent; indigenous peoples (Mayan, Inuit, Hawaiian, Onondaga).

PEACE - ENGLISH –Australia, Canada, England, USA.
AMAN - URDU –Pakistan, India.
AMNIAT - PASHTO –Afghanistan, Pakistan.
*SALAM - ARABIC –spoken by almost 200 million people in more than 22 countries, from Morocco to Iraq, and as far south as Somalia and the Sudan. Also by Palestinians in West Bank and Gaza.
*HE PING - MANDARIN –China, particularly the northern, central and western regions, and Taiwan.
UXOLO - XHOSA –South Africa.
*SHANTI - HINDI –one of the 15 “national languages” of India, a country with 1,683 “mother tongues” and 850 languages in daily use.
AMANI - SWAHILI –Kenya, Uganda,Tanzania, other countries of east and southern Africa.
DAMAI - INDONESIAN –the approximate 6,000 inhabited islands of the Indonesian archipelago which straddles the Equator between the Indian and Pacific oceans.
PACE - ITALIAN –Italy.
AMAITHI - TAMIL –southern India, Sri Lanka, South Africa, Malaysia, Singapore.
SAQ - UIGHUR –central Asia, including China (the Xinjiang Uighur Autonomous Region),Turkestan and Uzbekistan.
BAKÉ - BASQUE (Euskara is the name of the language) –border provinces between France and Spain.
SIPALA - HAWAIIAN –the speaking and teaching of Hawaiian was suppressed from the late 19th through most of the 20th century. In 1978, Hawaiian was made an official language of the state of Hawaii; by 1987, public schools were again allowed to teach the language.
SULH - DARI –along with Pashto, one of the two official languages of Afghanistan. About 1/3 of the population speaks Dari and it serves as the means of communication between speakers of different languages.
PAKE - ALBANIAN –is spoken by about 6,400,000 inhabitants of the eastern Adriatic coast in Albania, and the former Yugoslavia, principally in Kosova and Macedonia. There are perhaps 300,000 more speakers in isolated villages in S. Italy.
MUSANGO - DUALA (DHUWAL) –one of more than 200 Australian indigenous languages, most of which have been destroyed or live only in the memories of the elderly.
RUKUN - JAVANESE –first language for more than 75.5 million people mostly from Indonesia.
PAIX - FRENCH –principal spoken language in Belgium, Benin, Burkina-Faso, Burundi, Cameroon, Canada, Central African Republic, Chad, Comoros, Congo, Djibouti, France, Gabon, Guinea, Haiti, Ivory Coast plus the Canadian province of Quebec.
PACI - MALTESE –closest languages are Maghrebi Arabic, Syrian, Lebanese and Palestinian; the only Semitic language which is written in the Roman alphabet.
ETSOAOANOLAO - MAYAN LANGUAGE FAMILY –includes many languages that are spoken in Mexico, Guatemala and Belize by 1.5 million Mayan speakers.
HEIWA - JAPANESE –Japan; a language of uncertain origin, believed to be linked to both Altaic languages (Turkish, Mongolian, etc.) and also Austronesian languages like Polynesian. Although the Japanese language uses Chinese characters as one of its writing systems, Chinese is a completely different language whose pronunciation and grammar are completely different and cannot be understood by a Japanese person unless they have studied it.
FRED - DANISH –Denmark, Greenland, Iceland and the Faroe Islands.
SIDI - TIBETAN –Tibet, Bhutan, Nepal and parts of northern India. It is written in a script based on the writing system of the ancient Sanskrit language of India.
JAM - FULA –throughout west Africa. Most speakers are found within a band running from Senegal to northern Cameroon, including also the countries of Mauritania, Gambia, Guinea, Guinea Bissau, Mali, Burkino Faso, northern Benin, Nigeria, Niger and Chad.
HASÎTÎ - KURDISH –Turkey, Syria and the countries of the former Soviet Union, as well as Iraq and Iran. It is most closely related to the various dialets of Persian, to Pashto spoken in Afghanistan and Pakistan, and to Baluchi spoken in Pakistan.
PAN - CATALAN –a large area in eastern Spain, Andorra, the south of France, and Majorca.
NIMUHORE - RUANDAN –a Bantu language spoken in Rwanda, Tanzania, Uganda and Zaire.
*MIRE - RUSSIAN –predominant language within the borders of the Russian Federation, with an estimated 25 million additional speakers living outside its borders in its newly independent neighbors. In some countries, such as Armenia, ethnic Russians constitute less than 1% of population, while in others, such as Kazakhstan, Russian speakers number 40%.
POKÓJ - POLISH –Poland, with many speakers also in the US, the Ukraine and other former republics of the Soviet Union.
PAZ - SPANISH –language of Spain, Mexico and all Latin America except Brazil with 250 million speakers worldwide.
HOA BINH - VIETNAMESE –Viet Nam and about 2 million Vietnamese living overseas.
KAPAYAPAAN - TAGALOG –national language of the Philippines.
TUTKIUM - INUIT –known as the Eastern Eskimo language. It is spoken in northern Alaska, Canada and Greenland.
*SHALOM - HEBREW –official language of Israel. Outside Israel, it is primarily used by Jews for religious and ceremonial rather than common language purposes.
NIRUDHO PALI –ancient language of India from the Indo-Aryan group. The earliest of the Buddhist literature is in Pali.
SKAÑNOÑH ONONDAGA –spoken language of one of 5 indigenous nations that formed Iroquois Confederacy (Haudenosaunee) in what is now called New York State in USA.

Produced by Syracuse Cultural Workers, who are committed to organic cotton and fair and equitable labor practices. All SCW-produced shirts fulfill those criteria.

Why Organically Grown: Conventionally grown cotton is considered the world's 'dirtiest' crop due to its heavy use of insecticides, pesticides, and synthetic fertilizers, all making the crop a health hazard to workers, and a major source of groundwater pollution. Some of these chemicals are among the most toxic classified by the US Environmental Protection Agency. In developing countries, where regulations are less stringent, the negative impacts are even more severe. Aldicarb, parathion, and methamidopho, three of the most acutely hazardous insecticides to human health as determined by the World Health Organization, rank in the top ten most commonly used in cotton production. All but one of the remaining seven most commonly used are classified as moderately to highly hazardous.

And Sweatshop Free: The US Department of Labor estimates that 60% of garments sold in the US are manufactured under conditions which violate one or more fair labor laws. Our domestically sewn shirts are made by companies that insure fair labor practices. When garments are made overseas we choose vendors who require documentation (and verification through inspection) that workplace conditions are safe, that workers are not harassed or abused, that all workers are treated with respect, and that products are never made with forced labor or child labor.